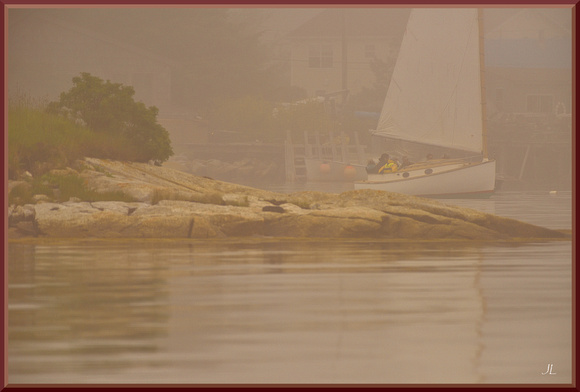 Setting Off in the Fog

I've been lost in the fog on the ocean. It wasn't much fun. I try to avoid a recurrence. Today I felt lucky to row to the channel marker about a mile out and then back to the harbour before the visibility closed down. I was on Clark's Island, one of the harbour islands, taking photos when I saw Minou raise sail. I got this shot early, and then watched first from one side of the island and then the other as she disappeared offshore. I don't know the story. I haven't talked to my neighbours. Maybe they were checking out a new GPS. Maybe Minou's skipper was showing off his sea skills. Whatever, it was a wondrous thing to see. And to cap it all and make it a complete thing of no worries, I watched them from my dock come back in a couple of hours later. All safe.